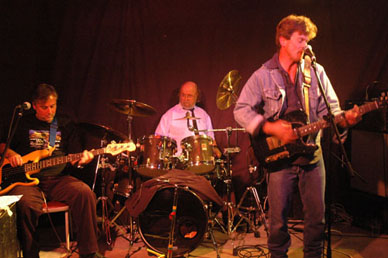 The music is an entirely original blend of country blues, spearheaded by the songs of Mark. Lyrically the songs plumb the darker side of sex, romance and politics – sometimes fusing all three. However, the band is not adverse to country hokum when the mood takes them.

The three piece sound utilises the acoustic guitar and the wheeze and clack of the accordion and the rawer sound of an electric trio. Highlighted with lap slide and harmonica the music draws on the influences of Hank Williams, Leadbelly, Sonny Terry & Brownie Magee and the Weavers along with Steve Earle, Gram Parsons and Guy Clarke. (You could probably throw Phil Ochs in there as well with some of the more oblique songs.)